Category Archives: what to read 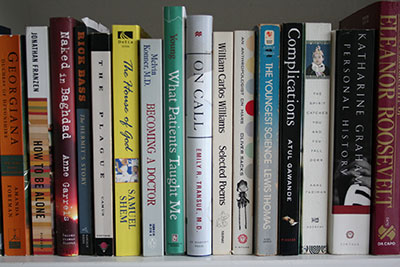 Last week I got to talk writing with a dozen smart medical students, all with writerly inclinations. I’m a believer that writers learn best from what they read, so I’d asked the students to look at two short narratives, “The Unknown Assailant” by Frank Huyler*, and “Sudden Death,” by Emily Transue**, both of which describe the inner life of young physicians.

Huyler, an emergency physician, grapples with the discovery that he’s taking care of an accused murderer. Among the students there was much appreciation for Huyler’s storytelling skill — spare sentences and images, effective use of minor characters — and though he never overtly tells you what he feels, you’re sure of it by the end.

Transue’s story, about an elderly man who codes and dies unexpectedly, explores the moment a physician comes to understand she can’t always exert perfect control over a patient’s outcome, that people may still die regardless of how well she does her job. In contrast to Huyler, she tells you exactly what she’s feeling. And the writing is just as effective because it’s so clean, unaffected and honest — she doesn’t try to sound like a writer.

For those who write medical narrative, there’s lots to learn from these two very fine stories.

Filed under what to read

OK, so you’ve matched and are on to the Next Big Thing known as residency. Congratulations! If you’re like most medical students in Seattle, you may be wrapping up your last rotations as we speak. Which leaves you with plenty of time to ponder what life will be like come July. Consider picking up a copy of Dr. Emily Transue’s fabulous residency memoir, On Call (St. Martin’s Press, 2004). It’s a sympathetic take on some of the most difficult moments in medical training, moments that interns and residents all too often face alone. And bonus, most of the chapters are short enough that this book is readable during residency. That’s no small thing — it’s a time when months might slip by without a sentence of recreational reading.

Filed under what to read